A friend of mine shared a news article about a 15-year-old girl who is living in one of the Texas based warehouse facilities full of the immigrant children that have been torn from their parents. This girl was one of the oldest of the children detainees and has had to take on tasks such as changing diapers and teaching the other children how to care for one another. This article really sat heavy with me, it’s one thing to think about children being “housed,” as it’s being spun by the White House, and quite another once you realize that there are so many children under the care of so few that little babies are being made to sit in dirty diapers for unbearable periods of time. I wondered if it was the unmistakable stink of human waste wafting into the air or perhaps the relentless crying that compelled this 15-year-old to take on the burden of defacto mother to hundreds of toddlers?

“This really breaks my heart” my friend commented on the link. Even though her heartfelt sympathy attracted over a dozen “likes,” those who chose to reply to her comments berated her feelings. When not trying to pivot the conversation to make a point that suited them, many of the replies amounted to “Why should you feel empathy, they did this to themselves” and “this is what happens when you break the law.” As if responsibility can somehow be laid at the feet of the youngsters themselves. It’s highly offensive when internet windbags pretend to be scholars of the law but either chose to ignore or fail to realize that coming to the United States to seek asylum is not illegal. And this kind of repugnant assholery overwhelmed the thread like vultures to a carcass.

I worry about how easy it is for some to insulate themselves into their own personal bubble but loudly express their personal disdain for the tribulations of those less fortunate. This “too bad, so sad – glad it’s not me” attitude is reminiscent of the French rule of Marie Antoinette and Louis XVI who ignored the woes of the poor and starving, which ignited the French Revolution. Do we really want to psychologically tramatize thousands of children who will grow into adults that have a deep hatred towards this country? How is that a smart plan of action when we currenlty credit nearly all of our mass tragity’s to mental health issues or terrorism? Are we really this ignorant?

And let’s not forget the grisley fate that met not only Marie and Louis, but their sympathizers as well. 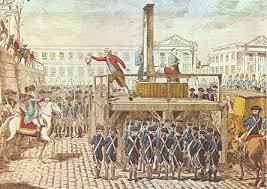 If we do not learn from our history, we are doomed to repeat it. #PracticeEmpathy